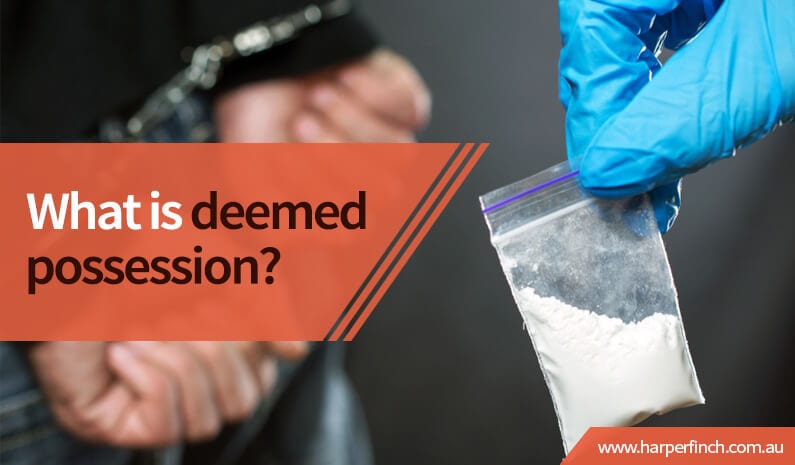 It is a well-known fact that it is a crime to possess certain items in Queensland.

For example, the Weapons Act makes it illegal to possess weapons such as a switchblade knife.

It can also be a criminal offence under the Summary Offences Act to possess certain items if they are to be used for committing other offences, such as burglary or unlawful use of a vehicle. This could include a crowbar, for example.

The laws relating to possessing dangerous drugs in Queensland is quite clear and these are outlined in section 9 Drugs Misuse Act. In summary, it is an offence to possess dangerous drugs (such as cocaine, marijuana etc) unless the person has a lawful excuse.

What is less-known however is that you do not need to physically be in possession of dangerous drugs to be charged with being in possession. In fact, they do not even need to be your drugs. This unusual rule is called “deemed possession”.

What Is Deemed Possession

The relevant law about drug possession states that “a person who unlawfully has possession of a dangerous drug is guilty of a crime”.

However more detailed information about possessing drugs is found in section 129(1)(c) Drugs Misuse Act. This section states that if drugs are found in or on a place that is owned or under the control of a person, that person can be charged with possessing the drugs.

In practical terms, this means that you can be charged with possessing drugs if the police search your vehicle and drugs are found in the boot.

This law also has serious consequences for people who own or rent a home that has drug users visiting. If those visitors leave drugs at the residence, the owner/renter can be charged with possessing the drugs.

If you are deemed to be in possession of drugs, you can be charged and convicted as if you were in fact the owner of the drugs.

Is There a Defence?

The law provides a defence which states that a person will not be guilty of the offence if they can prove that he or she neither knew, nor had reason to know, that the drug was in or on the place.

This defence, however, creates a serious issue for anyone wanting to rely on it.

Unlike the standard rule that the police need to prove their case against an accused, this defence requires the accused to prove that they did not know about the drugs.

The problem is that it is extremely difficult to provide evidence that you did not know something!

Alternatively, an accused may be able to argue that there was no reason for them to suspect that the drugs were present. Again, this can be difficult to prove.

How To Avoid Being Charged With Deemed Possession

The best way to avoid being charged with possessing dangerous drugs is, of course, to avoid drugs altogether.

However, as this article shows, you also need to make sure you don’t get charged with possessing someone else’s drugs.

You can take steps to avoid this by knowing more about your friends or visitors. If you suspect that they be in possession of drugs, you can ask them to not bring them into your house or car.

If you lend your car to someone or let someone stay in your home while you are away, you can also ask them whether they have left anything that may be illegal.

We understand however that these steps might not be so easy in real life.

Therefore if you face being charged with possessing dangerous drugs (whether your own or someone else’s), you should seek legal advice immediately. An experienced criminal lawyer will be able to help you navigate the criminal justice system to get the right outcome.