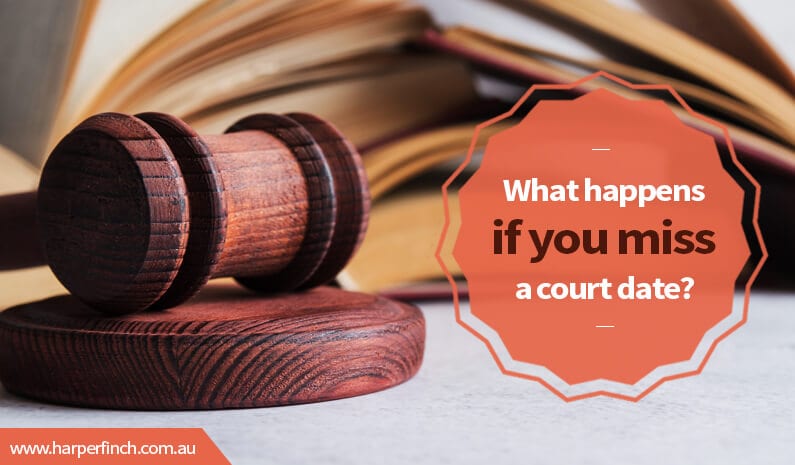 If you are charged with a traffic or criminal offence in Queensland, you will (almost always) need to attend court. You will then have the option to plead guilty or not guilty to the charge.

However, people sometimes miss their court date and this could be for any number of reasons.

For example, a person may be sick on the day of court and be so physically or mentally unwell that they cannot make it to court.

Occasionally, a person may simply be disorganised and forget that they have a court date. This often happens when the person is heavily intoxicated when being charged with the offence. They wake up the next morning and don’t remember that they were in fact charged with an offence.

If you think that you will miss a court date for any reason, or if you think you might have already missed an appearance, it is important that you understand what might happen to you as a result and what you should do to fix the problem.

The Penalties for Missing a Court Date

If you fail to attend court at the required time, the consequences can be serious.

If it was your first court appearance for your case, the magistrate will likely issue an arrest warrant. This means that the police have the power to find and arrest you and bring you before the court for failing to appear.

You will then need to explain why you missed court. If you are unable to provide a good enough reason, you will be punished by the magistrate. Ordinarily, this would involve a fine for the first time you fail to appear. However, if you have a history of failing to attend court, a magistrate can impose a more serious punishment which can include imprisonment.

If it was not your first time in court and you had previously been granted bail for the offence, you can be charged with breaching your bail conditions. This is seen as contempt of a court order and is treated very seriously.

In addition to being given a punishment such as a fine or jail, you may also need to convince the magistrate that you deserve to be given bail again. This can be difficult if you have just breached your bail conditions.

What To Do If You Fail To Appear

If you fail to attend court when required, the first thing you should do is seek legal advice. An experienced criminal lawyer will be able to provide you with advice and possibly appear in court with you to explain why you did not attend court.

If you have any documents which explain why you did not attend, you should make sure you get these. This could include, for example, a medical certificate from your doctor.

Lastly, you should surrender yourself to the police or the local courthouse. You should do this as soon as possible, especially if you know that a warrant has been issued. It is a much better option than being arrested by the police and taken to court.