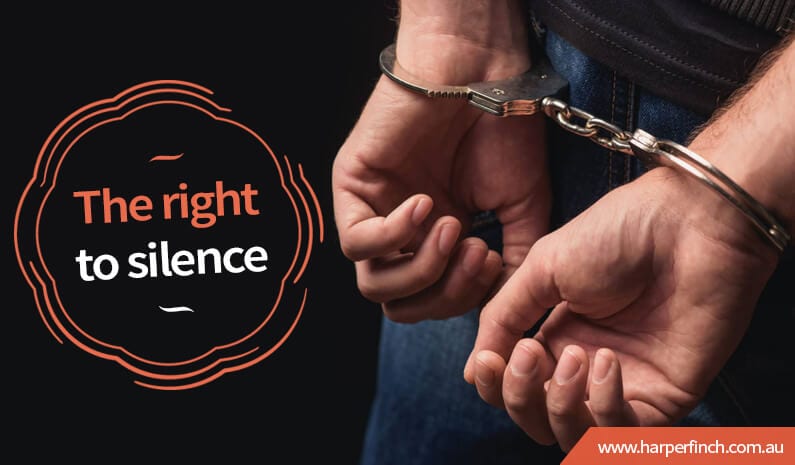 “You have the right to remain silent”.

This is a phrase we hear so often that it’s almost become a cliché. In fact, if you were to ask someone to name a legal right that they know they have, they would probably tell you that they have the right to silence.

Despite this, we at Harper Finch Lawyers are concerned by how many people don’t exercise their right to silence, leading to all sorts of problems with their case later on.

In this article, we look more closely at the right to remain silent and just why it’s so important to exercise your right.

What Is The Right To Silence?

If you have been accused of committing a criminal offence in Queensland, you have a general ‘right to silence’. In other words, you have the right to not answer any questions that you are asked by the police. This is a fundamental right within the Queensland criminal justice system and is recognised by law.

In the unlikely event that you are being questioned by the police for a criminal offence, you might feel that you are doing the right thing by cooperating and assisting the police with their inquiries. While cooperation can be a mitigating circumstance if you end up being sentenced in court, answering questions can result in you being in a much worse position than if you stayed silent.

Here are some examples why it’s so important to remain silent:

The police are required to follow strict safeguards to ensure that they do not act outside of their powers. Imagine, for example, if the police had the power to simply enter your home anytime they wanted to conduct a search, without any information that you may have committed an offence. These safeguards ensure that your rights as a law-abiding citizen are protected.

However if the police question you about the commission of an offence and you admit guilt, you may have unknowingly given up your rights to be protected by those safeguards. This could allow the police to act beyond their ordinary powers which is something to be avoided at all costs.

Another example of why you should remain silent is that you could give information to the police which results in additional criminal charges. For instance, the police might be questioning you about a small amount of drugs you were found in possession of. During questioning, the police may ask you why you were in possession of the drugs and, trying to cooperate, you admit that you were on your way to sell it to a friend. This admission would almost certainly result in you being charged not only with possessing the drug but also supplying drugs (which is a much more serious offence).

A third example of why you should remain silent is that you might end up simply doing the police’s job for them. The police may want to question you about an alleged offence knowing that they might not have enough evidence to actually charge you with the offence. If you make any form of admission while being questioned, you are helping the police to prove their case against you. However if you had remained silent, the allegations might have gone away.

A final example is that many people feel threatened and intimidated when dealing with the police, or they may suffer from some form of mental illness. In these situations, a person could say things to the police which they did not mean to say or which might not be true. The police however will make a note about anything said to them and it then becomes extremely difficult to explain why those statements might not have been accurate or true.

It is therefore essential that you exercise your right to remain silent at all times.

Are There Any Exceptions?

There are some circumstances where you do have to answer questions. For example, you have to tell the police your name and address if asked. If you are in a car accident, you also need to answer questions about why the accident might have happened.

There are other circumstances where you might be required to answer questions, even if you don’t want to.

If you fail to answer questions when you are required by law, you may face criminal charges. It is therefore important that you seek legal advice from an experienced criminal lawyer as soon as you find out that the police want to talk to you.

How Do I Exercise My Right To Silence?

If the police want to question you about an alleged offence, all you need to say to them is “I have nothing to say”.

The police may try to pressure you into talking to them. If this happens, you can either just repeat the above phrase or alternatively simply say nothing. You can also tell the police that you won’t be saying anything further until you have obtained legal advice. This is often enough to convince the police not to ask further questions.

Will My Silence Be Regarded As Guilt?

Many people are concerned that they will be presumed guilty if they don’t try to present their own version of events to the police. They think that anyone who is truly innocent would do everything in their power to convince the police of their innocence.

In reality, your right to remain silence is protected by law and no one is allowed to regard your silence as an admission of guilt.

The police have the ultimate responsibility of proving that you are guilty – it is not up to you to prove that you are innocent by presenting your own version of events.

What If I Want To Cooperate?

There are times when cooperating with the police can be to your advantage. Cooperation with the police (along with an early guilty plea) can result in a reduction in the penalty a person receives when being sentenced in court. This is because it shows a person’s apparent remorse for their offending behaviour.

If you want to cooperate and provide a statement to the police, our view is that you will have plenty of opportunities – after you have sought legal advice.