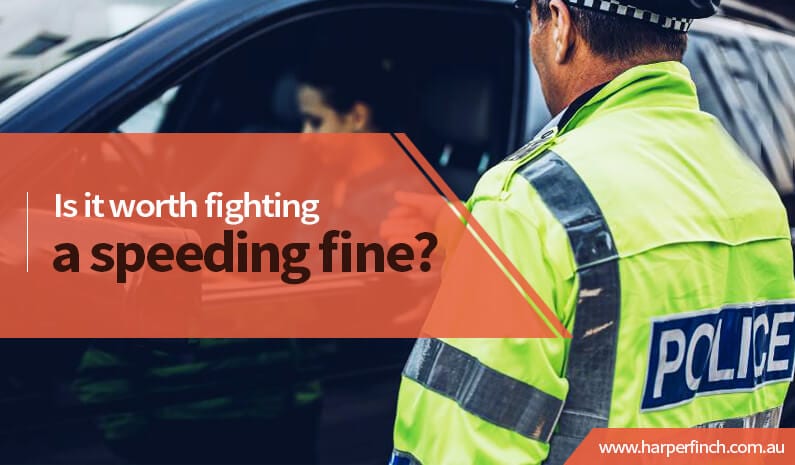 If there is one thing that seems to infuriate Queensland drivers more than anything else, it’s receiving a speeding fine. Whether it’s being pulled over on the side of the road by a police officer with a handheld radar or opening up a letter containing a speeding fine, no one likes finding themselves in this position.

Unsurprisingly, we get a lot of people contacting us to find out whether it’s worth fighting their speeding fine and, if so, what’s actually involved with taking it to court.

Our advice about whether it’s worth fighting a speeding fine usually depends on each person’s reasons for wanting to fight it in the first place. For some people, they’re at risk of losing their driver’s licence due to demerit points or because of a high-speed offence (more than 40km/hr above the speed limit). For others, they are worried about how they will pay the fine. Lastly, there are those who simply want to fight the fine out of principle.

We therefore thought that it would be helpful to review some of the factors you should consider when deciding whether to fight a speeding fine or whether you should simply pay the fine and put it behind you.

Are You Actually Guilty?

The first issue (and arguably the most important) is whether you are actually guilty of the speeding offence or not. Sometimes, it’s difficult to know the answer to this. For example, you might receive the fine weeks after the offence was allegedly committed and there may be multiple vehicles in the photo.

In other cases, you know you’ve done the wrong thing and there’s no question about whether you were exceeding the speed limit or not.

It is important to know whether you are actually guilty or not because this may determine the strength of the police case against you. If you know that you were not speeding, the police case will likely be a lot weaker and therefore easier to contest. However if you know that you were in fact speeding, it will be much harder to fight the fine as the evidence against you will be much stronger.

It is recommended that you seek legal advice to discuss whether you are likely to be found guilty or not guilty.

Many people do not realise just how much time it can take to fight a speeding fine in court. In reality, you should allow for three or four days (or more) actually in court and the entire process can take many months from start to finish.

There will likely be a few court appearances after your initial court date so that you and the police can update the magistrate about how the case is proceeding. Again, you may be waiting for most of the day for your case to be heard.

After perhaps four or five months, you will appear in court for your trial. There will likely be several trials listed for the same day and in the same court and you might not get priority (people represented by lawyers almost always get priority). As a result, your trial might only take place in the afternoon or, even worse, it may be adjourned to another day if the court does not have the time to hear your case.

It is therefore important that you consider the impact of this on your family and/or employment.

You May Receive a Worse Punishment

When you receive a speeding fine, the fine itself will indicate how much you will need to pay if you accept the fine.

However if you take the speeding fine to court and you are unsuccessful in fighting it, the magistrate is not required to impose the same fine as what was written on the ticket. In fact, the magistrate has the power to impose a fine exceeding $4,000 plus court costs.

In addition, the magistrate also has the power under s187 Penalties and Sentences Act to disqualify your driver’s licence immediately at court. Although this would likely only occur for particularly serious offences, the magistrate may also decide that it’s appropriate based on your prior traffic or criminal history.

Speeding fine trials can be surprisingly difficult. Often, they come down to technical arguments which relate to whether a particular radar device was working properly or not. Other times, the trials will be decided according to complex legal arguments where it will be you versus experienced police prosecutors who may have spent years training for trials just like yours.

For this reason, we strongly recommend that you seek legal advice before contesting a speeding fine, even if you decide to fight the ticket in court yourself.

As can be seen, there are many different things to consider when deciding whether you should fight a speeding fine or not. You are the only person who can decide whether it’s actually worth it or not.

If you are at risk of losing your driver’s licence, there may be other options available and we can discuss these with you. For example, you may be able to apply for a special hardship licence which will allow you to continue driving despite being suspended due to a speeding fine.

Hopefully this guide has assisted you with making a decision about whether you want to fight a speeding fine. If you have any further questions, contact us now to discuss how we can help.